Amster{damn}, You Are One Cool City!

Our guest blogger, McKenzie, had a last minute weekend trip, and we must say she chose a pretty cool city!

Sojourn #7 Olivia and I decided last minute to travel to Amsterdam for a weekend diversion. I’m so glad we did, because it’s now on my list of favorite cities ever. The only thing I really knew about Amsterdam was that The Fault in Our Stars bench was there and the people around the world went ballistic when it was removed (don’t worry it was returned).

We left super early Friday morning – I’m talkin’ 5 AM early – and arrived around noon. Everything was smooth sailing until we went to baggage claim and our luggage was nowhere to be found! Let me start by saying we had a layover in Frankfurt, which we always do, but because our connecting flight was so close in time our luggage didn’t make it on our flight to Amsterdam. And yes this means we checked our luggage – sorry dad, I just can’t bring myself to become a carry on type of girl (too many shoes I suppose). When we went to the service desk, I discovered my luggage somehow ended up in Munich (even the service assistant was confused by this) and Olivia’s was still in Frankfurt. Oh well, it would get delivered to us eventually right?

We arrived to our hotel, NH Amsterdam, which was fantastic if I do say so myself. I highly recommend it – great staff, spacious rooms, and perfect location! After we got settled, we headed out for lunch. Little did we know we would stumble upon some of the best Thai food we’ve ever had. A little side note for y’all – I am a pretty picky eater and only recently tried Thai food for the first time in Switzerland because my roommates made me. To my surprise, I was obsessed! So with my newfound love for Thai, you can imagine my excitement when we found Royal Thai, a little hole in the wall restaurant with as authentic Thai food as one could want while in Holland. 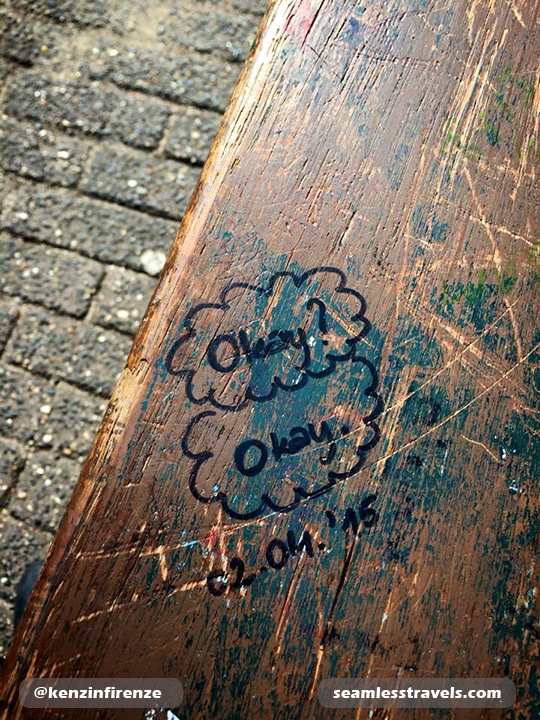 After lunch, we explored the city of Amsterdam, walking through all the streets and along the canals. It has got to be one of the cutest towns I have ever traveled to – I was absolutely in love! We walked all over (racking up those steps on my FitBit woo!) and found the bench from The Fault in Our Stars, obviously. If you go to Amsterdam and don’t take a picture with the bench, did you even really go to Amsterdam? That night we got takeout sushi and went back to the hotel and watched Spiderman with Emma Stone and Andrew Garfield (no judging – we’d been up since 5 AM and were exhausted) 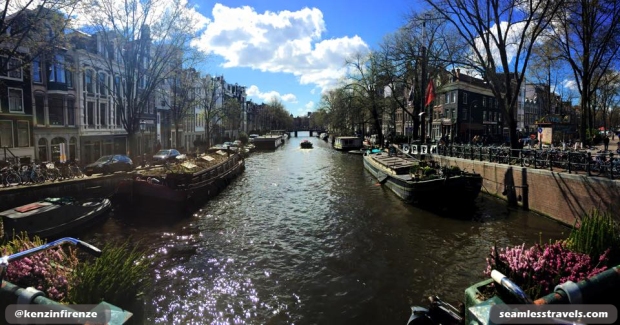 Everyone knows that when you travel to Amsterdam, it is an absolute must to tour the Anne Frank House. We stood in line for about two and a half hours – I’d like to think it went by decently fast. Touring the Anne Frank House was very humbling to say the least. Walking through the halls and seeing the rooms where each of them stayed and imagining how they lived in hiding for two years was surreal. There were pages of Anne’s diary throughout the house that you could read. At the end, there was a video playing with authors, celebrities, political figures, talking about Anne Frank. During the video, there was one quote that really stuck out to me, “All of her would haves are our opportunities.” I will be the first to say that I tend to complain about little things that don’t even matter when instead I could be focusing on all that I have been given. Taking this to heart, I have this quote saved as a note in my phone and look at it every day as a constant reminder to be thankful for this amazing life.

Saturday night we found another hole in the wall restaurant – only this time we were in search of Mexican cuisine! Those who know me, know I have really, really been missing my Tex-Mex. Olivia and I were so excited, we did the whole nine yards – margaritas, chips and guacamole, and I got chicken tacos and she chicken enchiladas. Needless to say, I left dinner in a food coma – not kidding ha.

Well, only one last area of Amsterdam to visit after our meal and before our departure on Sunday… drum roll please… the Red Light District, specifically De Wallen! We had been told to walk the Red Light District for the experience. Well it was interesting…. Something for me to see once, but it’s just not my cup of tea!

Sunday morning we got up early and had breakfast at Pancakes!, a well-known restaurant in Amsterdam. They only serve pancakes (hence the name, Pancakes!), and after having them I can definitely see why. The pancakes were amazing! After breakfast we walked to the park where the famous ‘I Amsterdam’ letters were – see if you can see me standing on the ‘T’ in the picture. We hung out there for a little while, enjoying the lovely weather, then walked back to the hotel to get our things before heading to the airport.

All in all, Amsterdam was incredible in every way, shape, and form. Join me next week as I attend Florence’s first ever food truck festival and get ready to run the 32nd Annual Firenze Half Marathon (also my first ever half marathon)!

Until then,
McKenzie xx